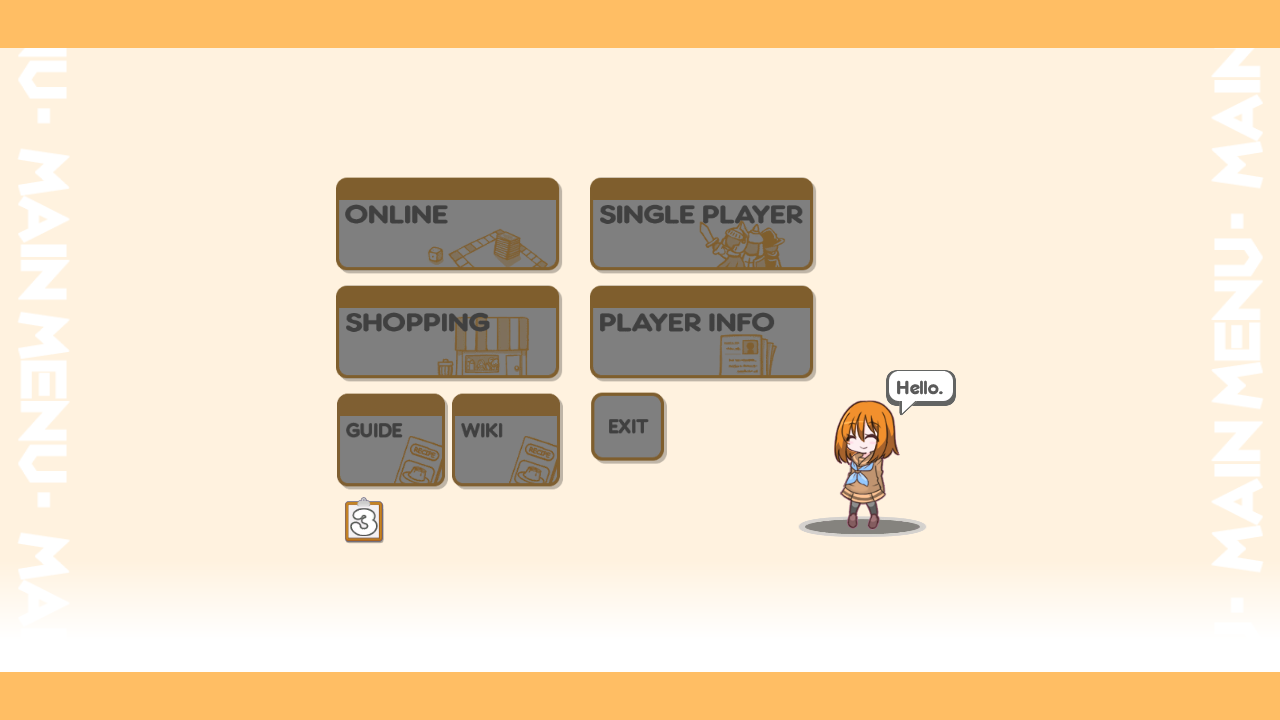 The STG doujin studio Orange Juice rose into prominence in the scene in the 00s, releasing a variety of high quality titles of different styles and subgenres within the genre such as QP Shooting, Suguri, Acceleration of Suguri, and Flying Red Barrel. 100% Orange Juice is the 5-year anniversary project of Orange Juice, in the form of a 1-4 player crossover boardgame, released as a small project featuring three original characters and the most notable protagonists and antagonists of the QP, Red Barrel and Suguriverses.

The gameplay itself consists of dice rolls to move on a tile-based game board, with the objective to gain a certain amount of victory points in the form of either stars or battle wins and advance up levels by returning to your home panel until one of the four participants reaches the highest level. Taking your turn can be as simple as rolling the dice, yet tactical considerations begin at selecting your character (each with different statistics and abilities) and making your deck. As each player's deck is shuffled into a common central deck, any cards aside from your character-specific hyper can be drawn by anyone, so rather than taking the most powerful cards, you want to consider ones that are better for you to draw than they are for others. During the game itself the player will get to consider branching paths, cards and choices to battle other players to hopefully mug their stars - yet, given the element of dice, things will very rarely go according to plan and players will have to do a lot of on-the-fly reassessment to maximize their chances. The element of luck allows new players to win often enough to have a good time, but a good enough player can certainly reach a ~35% winrate in a four player field, so the effect of skill is not negligible either - providing plenty of enjoyment to players of all skill levels, accompanied by the optional ingame text chat that allows players a chance for fun banter or to lament their frequent bad beats. A typical round with animation speed set to fastest clocks in at 20-30 minutes. 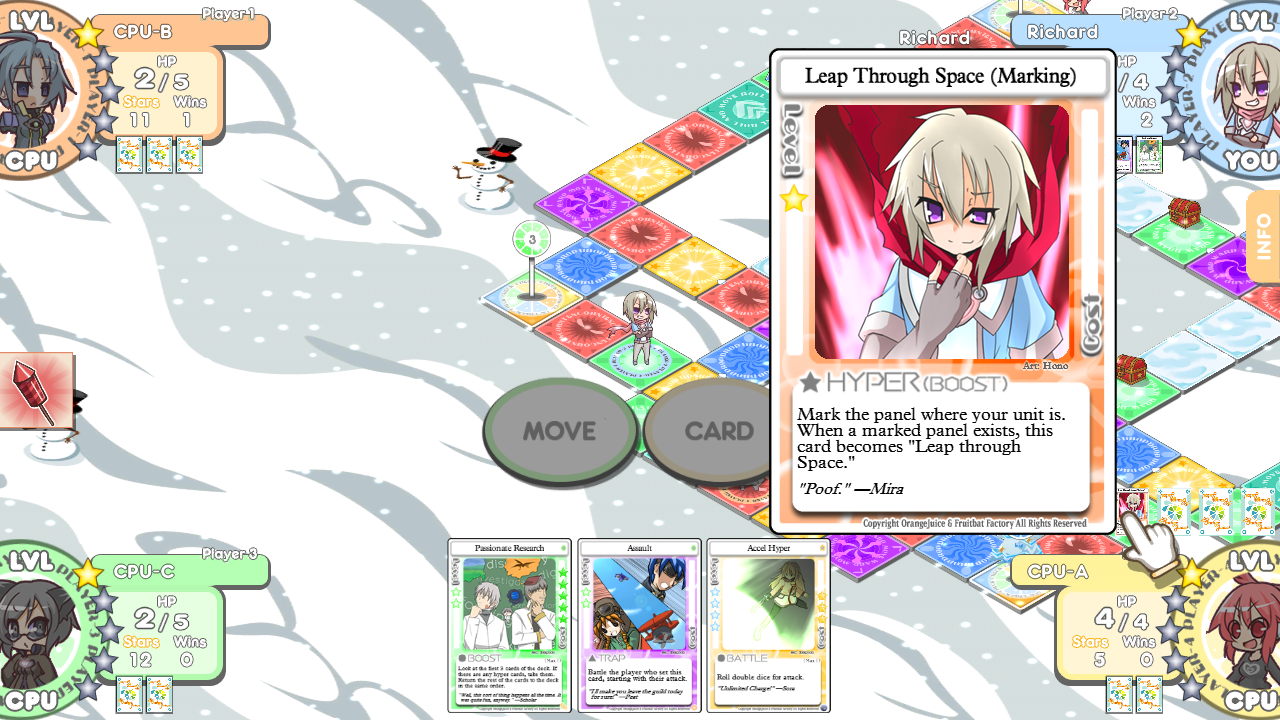 In 2013, the freshly founded Fruitbat Factory was looking for games to localize and found this hidden gem. Even though nobody had heard of the game or the publisher before, the Steam storefront was not badly overcrowded yet and thus people, myself included, would come across the store page of the title while browsing and be intrigued by the uncommon premise as well as the clean and bright artstyle. Those taking the plunge would discover a rock solid, easy to pick up game that leaves room for tactical planning, and the charming cast of characters whose personalities come across even to players who have never heard of Orange Juice before. As word of mouth spread the game managed to gain a fairly large playerbase, which on the other hand helped Fruitbat Factory to support the game after its launch and provide further content for the game in co-operation with the original developers. As of this writing the game contains an astounding 51 playable characters in comparison to the original game's 12, as well as numerous added cards, boards, panels, campaigns, events, songs, voice acting, cosmetics, UI improvements and gameplay balance patches. 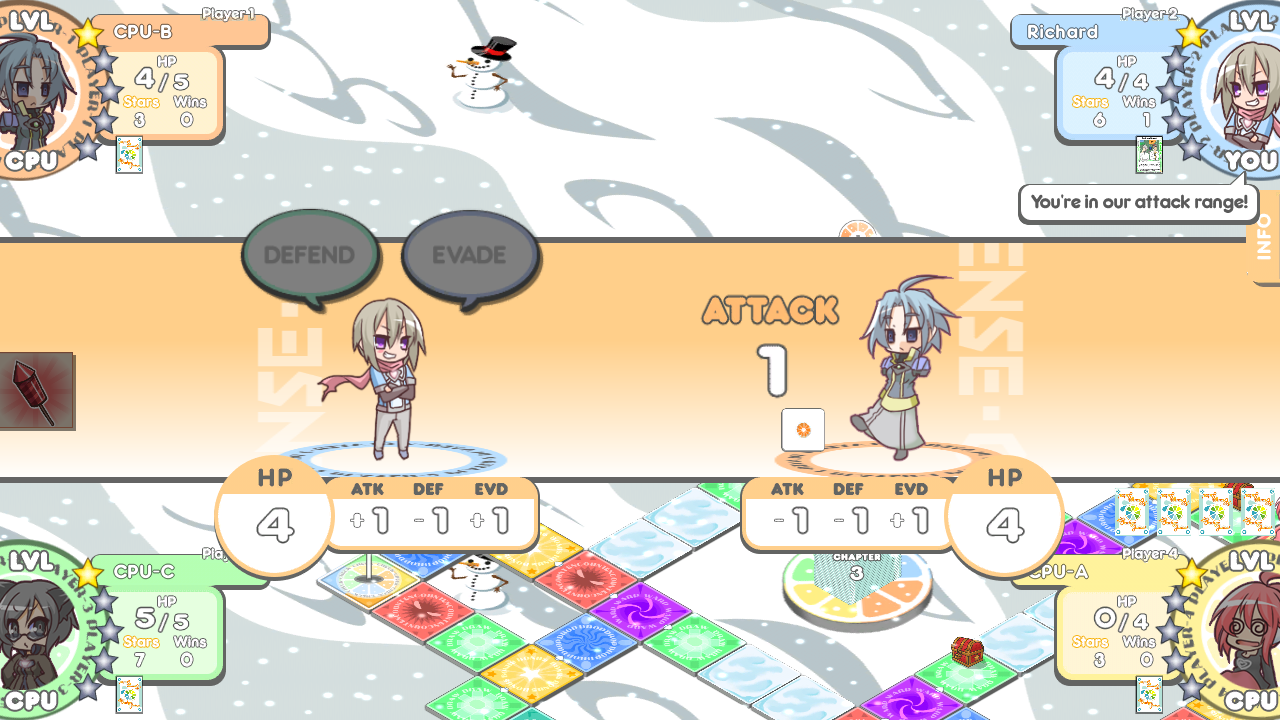 This game is simply an incredible labor of love on all fronts and the fact that a decade after its initial release the multiplayer is still thriving is no coincidence. It is both a fun, quick to pick up boardgame and an engaging tiny universe of its own. I have over 700 hours tracked on my account and foresee many more to come.