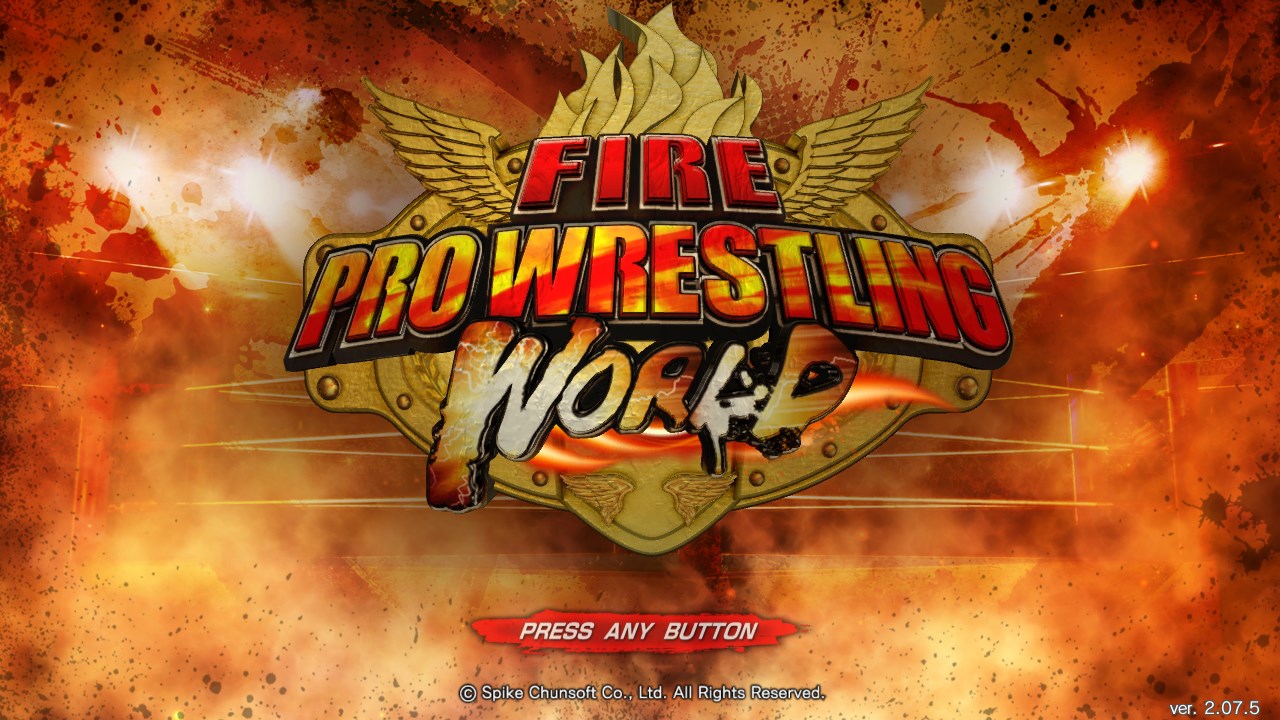 The pro wrestling game is a genre that has fallen on hard times since the PS2 era. For a very long time, THQ/2K's WWE series was quite literally the only game in town - a series that much like the company it is based on chases the glitz and spectacle of the sport (spart?) to such an extent the fundamentals are unacceptably lacking. Owing to both wrestling's worldwide popularity crash in the mid-00s and the rising cost of development of modern games, the only competing releases on the market were lacking amateur passion projects. Enter Fire Pro Wrestling World - Spike Chunsoft's attempt to capitalize on the resurgence of Japanese pro-wrestling through the revival of their old cult classic franchise. You could call FPWW a continuation of the Fire Pro series as much as it is a revival - the core gameplay and presentation has evolved very slowly from its origins, to the point you could grab a guide for a Fire Pro game from the 90s and feel right at home with the newest iteration.

The reason Fire Pro series is so lauded is its unrivaled AI logic system. You can very accurately replicate real life wrestlers trademark styles and sequences, or create your own, through a highly detailed AI logic chain system that determines the AI wrestler's behavior in each possible situation. Combined with the extensive moveset editor containing most strikes, grapples and holds that have been performed in a wrestling ring, edit point system to emphasize your grappler's strengths and weaknesses and the "good enough" appearance editor, the engine is robust enough to create and recreate any amount of dream matches. You can even edit referee behaviour to effectively adjust the desired length of a match! In case all of that is too daunting to bother with (and I am in the same boat), the workshop, especially on the PC, contains thousands of edits uploaded by people both recreating any real wrestlers anyone has ever heard of and a deep pool of fantasy fighters from various videogame and other media properties. 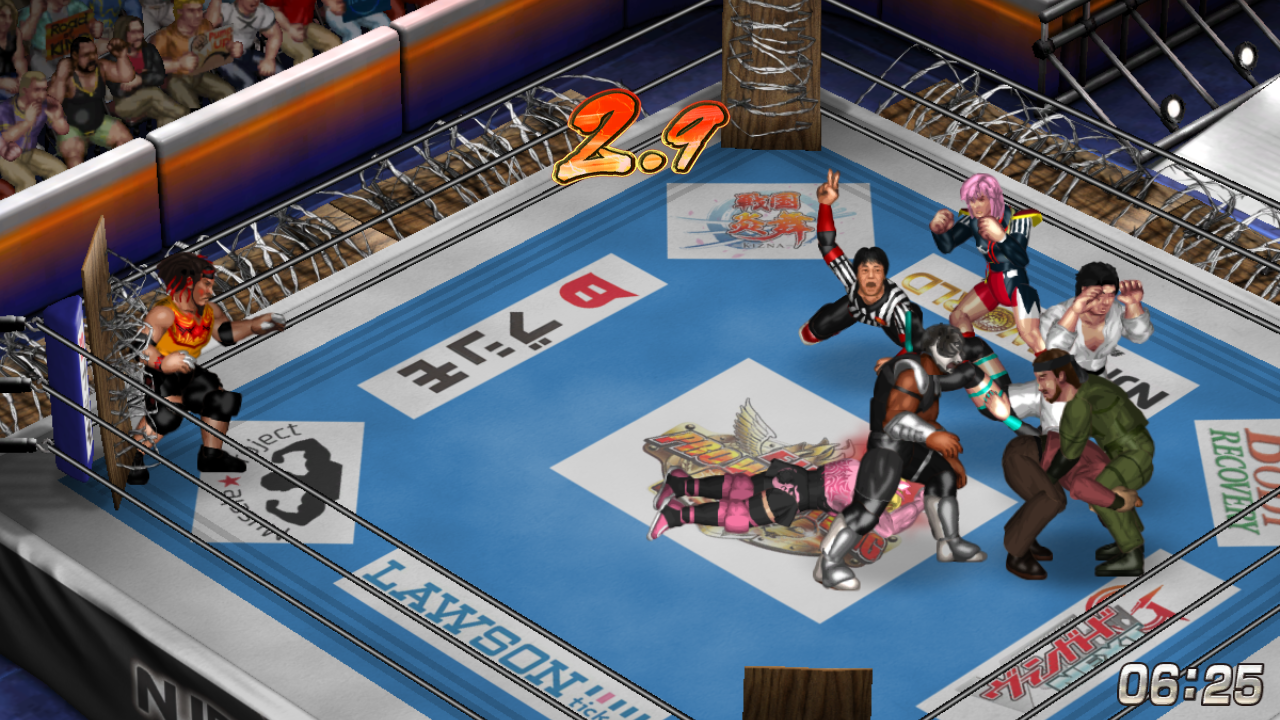 In addition to at-will singles and up to 8-man tag matches, the game boasts a modest variety of gimmick matches to spice things up, of the type seen in grimier japanese promotions of the 90s. Cage, Landmine Deathmatch, Barbedwire Deathmatch (featuring an option for a massive timed explosion), Battle Royal and kickboxing/MMA variants exist in here. You can set up any of these in a single match, single-elimination tournament or round robin tournament(of up to 64 entries!), as well as set up championship titles to contend for.

New to World is the Fire Promoter mode, which puts you in the charge of management of a wrestling promotion's finances. This is an in-depth management sim mode that has you manage aspects from hiring and salary decisions to possible cross-promotion with other feds, the locations events are ran in and available merchandise, and on the flipside contend with problems like finances, injuries, capricious freelancers or your prospective stars underperforming. You can also engage in cross-promotion with other promotions - but make sure that your roster and their training is stronger, because matches do not have a predetermined winner and you're heavily encouraged to win as strongly as possible. (One of my greatest triumphs was having Hatsune Miku over as a guest from another promotion and then taking away that promotion's junior heavyweight championship belt through Milano Collection AT beating her in a title match. No mercy.) Navigating all of that and turning your withering promotion's initial nosedive into an internationally growing dream match machine is highly satisfying. 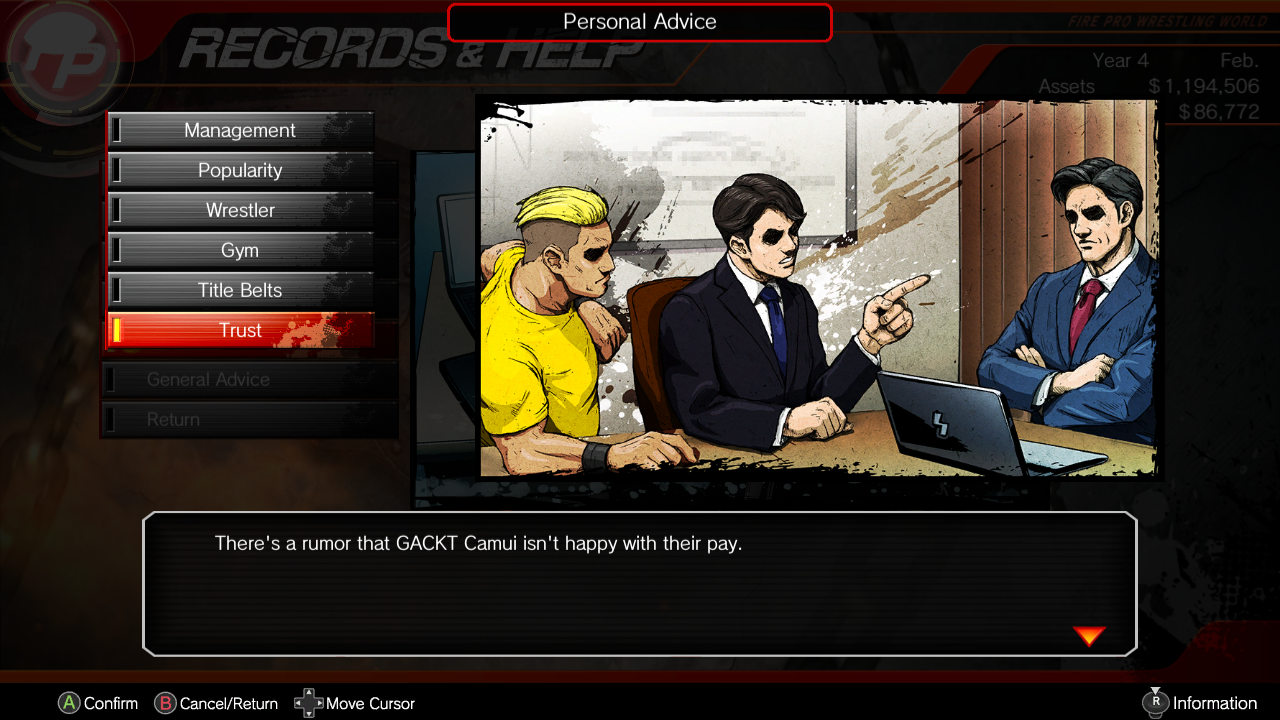 I've talked a lot about simulating matches, and the reason for that is it is my main use case for the game. The age and clunk of the game's engine shows through more when actually playing the game - though once you get hang of the learning curve it is a well thought out system. You are encouraged to play FPWW like a pro wrestling match (unless you're playing one of the shoot martial arts modes, of course). This means rather than a one-sided ass kicking, you give and take and follow the rhythm of a proper match - the trifecta of breath, spirit and match rating systems facilitate this. Breath is your standard stamina - too much sustained action without using the breathe button to take a break will make your fighter sluggish and even cause them to collapse after delivering a move. Spirit is more interesting - by intentionally holding down a button to let your guard down you stock up spirit, which makes you more resilient to pinfalls and submissions in the deciding stages of the match. Match rating measures the audience's satisfaction with the match and changes depending on what they are expecting - a long, hard fought battle is typically exciting, but a bout ending with a quick CRITICAL might do well if you're in a shootfight promotion. In addition to the standard play, online play and tutorial modes you can also try your hand at Fighting Road stories, where you create a hopeful rookie and take them through a visual novel storyline that branches based on choices and match results. As of writing this there are two different lengthy scenarios based on the real-life New Japan Pro Wrestling promotion, and an upcoming scenario penned by Suda51.

So what does this all add up to? A game I'm glad to have in my collection and I've sunk a fair amount of time into, as well as the best pro wrestling game available. While I certainly wish a game could combine Fire Pro's core simulation and wrestler logic customization with the accurate 3D environment, presentation and physics of the WWE games and the wild possibilities available in MDickie games, this is what Spike Chunsoft's skeleton crew can offer at this point in time, and it's certainly a sight above anything else on the market.