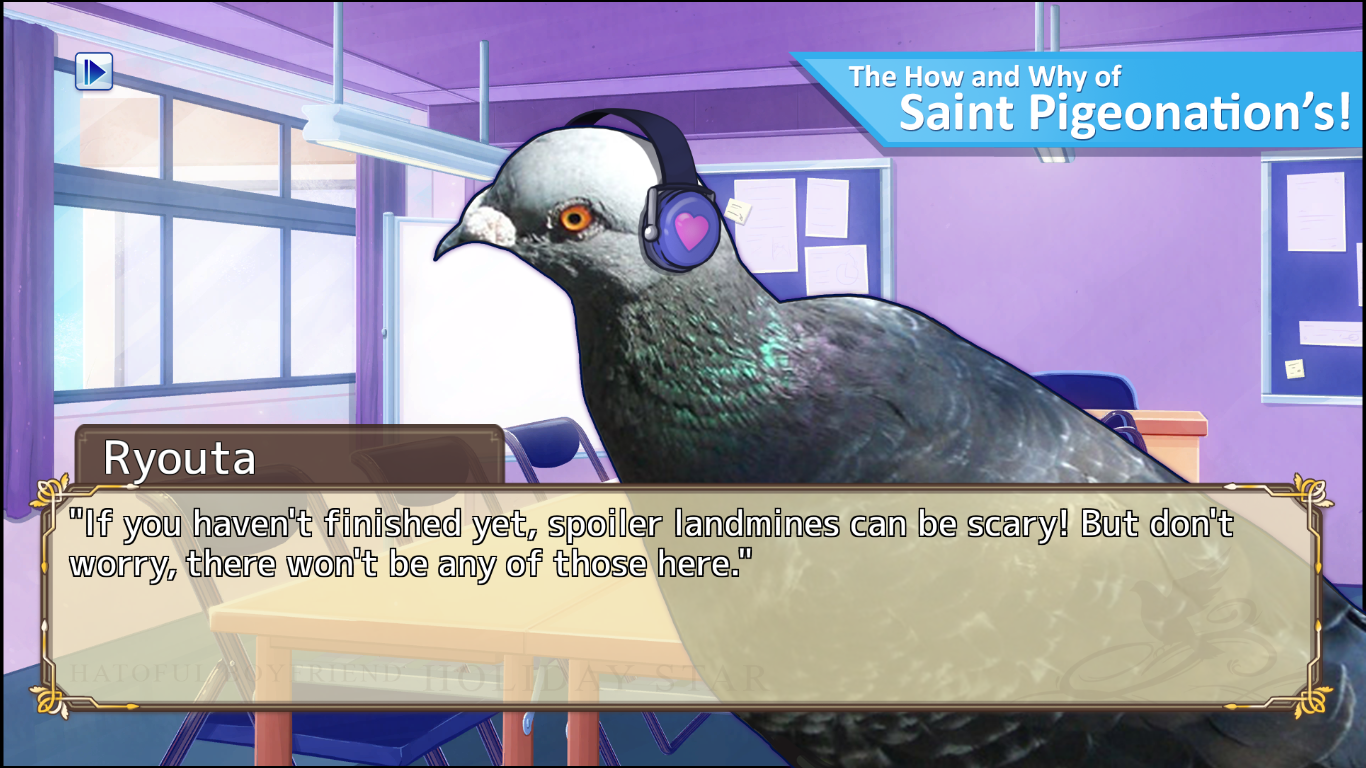 Hatoful Boyfriend is a visual novel penned by writer Hato Moa that started in original concept as a flash game made for April Fool's Day, featuring an otome game type setup of the main heroine surrounded by avian suitors. Following the unexpected massive popularity of the concept demo, development on a fully realized visual novel based on the concept commenced. Again, it gained massive popularity in the doujin scene and even attention from outside it thanks to its unusual premise. This spread to the English speaking part of the internet following a fan translation, which then later led to official English releases of the games and tie-in manga. The genius of the birdbrained premise is how Hatoful Boyfriend caught everyone's attention - and that initial hook is all the time it needs to reveal that underneath lies an experience of outstanding depth and character. 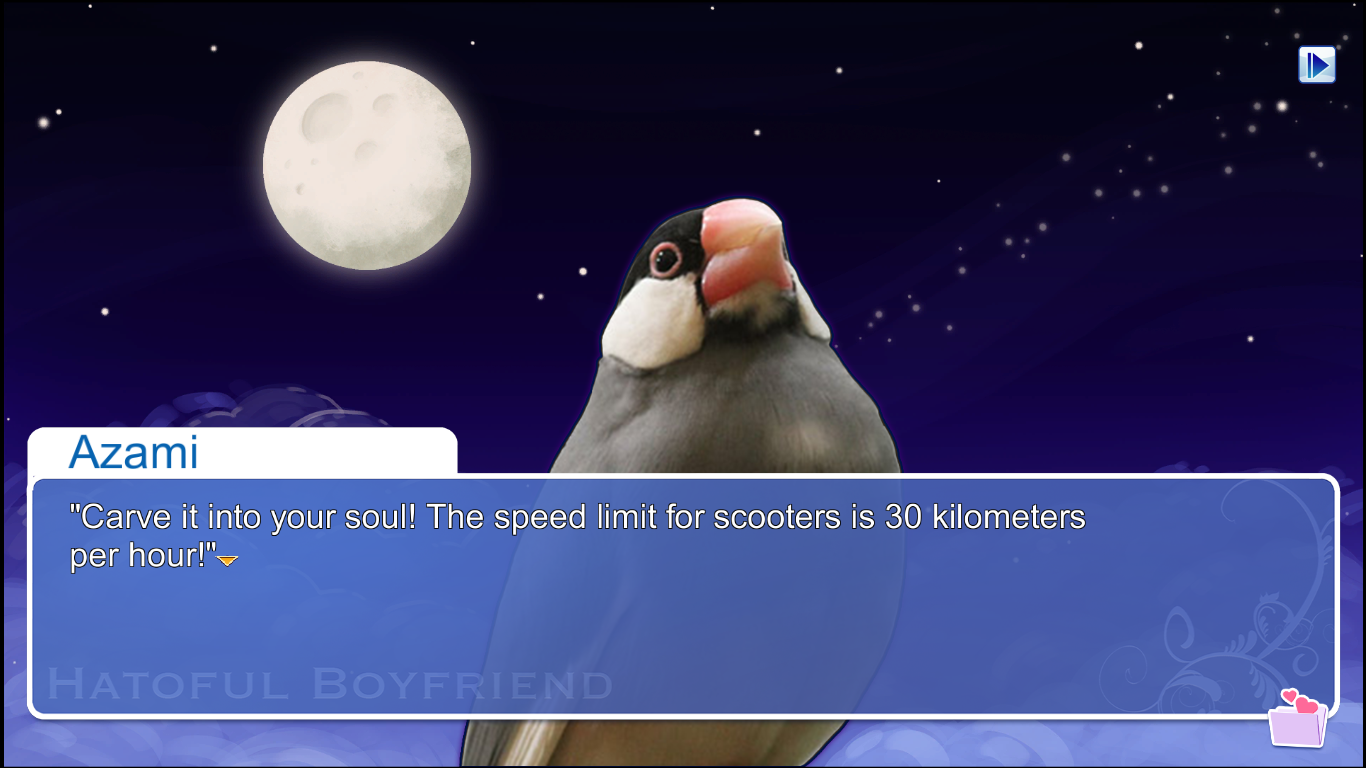 At its outset Hatoful Boyfriend presents itself as a typical school life dating sim game experience, with the wrinkle of all the characters you encounter being various species of birds. Aside from the initial shock of the visual absurdity, there are plenty of humorous situations and lines that arise from this juxtaposition - this is an outright funny game, with clever writing and presentation. Considering this presentation consists of bird photographs on simplistic backgrounds and music/sfx picked from royalty free libraries, its use is truly masterful. Many of the various potential suitors and other characters you meet initially present themselves as common archetypes, but their avian nature makes it seem fresh - and much like with the game in general, this is used to great effect to make the reader give this setup a chance so by the time the novelty wears off, they are already attached to the cast of the game. And is truly is a charming cast worth your time. And yet the bird "thing" is no cheap gimmick - it works precisely because Hato Moa's love of birds truly shines through in the writing.

If there is a downside to the game, it's that you're going to exhaust all there is to see in the common route while chasing through all the character endings, so the fastforward function will see heavy use. However it is worthwhile, as after most of the 13 character endings available from the common route have been reached, the next playthrough will commence with a brand new opening, which if followed will lead to the back half of the game. While the common & character routes are mostly whimsical and humorous with the occasional poignant (or disturbing) ending, the back route called Bad Boys' Love switches genres entirely, and in spite of, and indeed because of this is a tremendous followup and completion to the front half. The writing doesn't call attention to the bits of foreshadowing seen previously either by showing flashbacks - it trusts the reader to connect the dots, which makes the experience all that more satisfying. (And any possible future runs of the common route a lot of fun.) At the end of it most people probably feel shocked that the silly pigeon game managed to pull off a serious storyline with the greatest of grace - that is the magic of Hatoful Boyfriend. 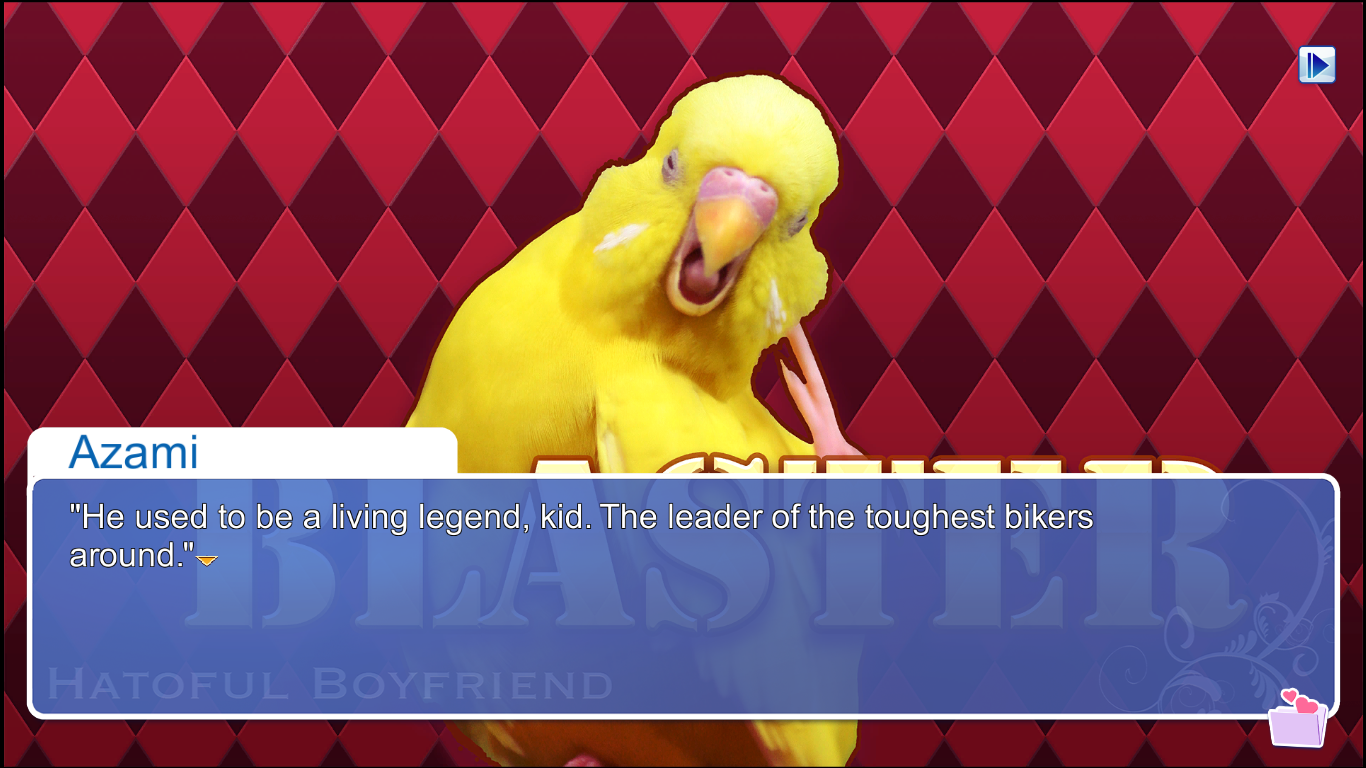 Hatoful Boyfriend: Holiday Star is the sequel/fandisk to the game, also available in English. This consists of a variety of mostly comedic shorter scenarios and skits, as well as a few lengthier stories that are a worthwhile addition and tell some tales that were left untold in the original - the dreamland sequence is certainly on a level equal to the heights of the first game. If you read the original, there is no reason to not read this one too. The remake of the games in 2014-2015 makes them run on Windows 10 reliably, and adjusts visuals and some of the music used. This is the version currently on sale, and on PC you can also get a few additional goodies such as some of the tie-in manga and the original game. There are also some manga that were released as e-books. Most of these are comedic 4koma but one gives a little big more insight on the inner works of a certain character (please read Holiday Star first).

So, that's Hatoful Boyfriend. A visual novel sensation that inspired plenty of imitators, that saw a wacky scenario and missed that what makes HB truly tick is the genuine love of the subject matter and the layered writing. It is truly a, well, heartful experience.